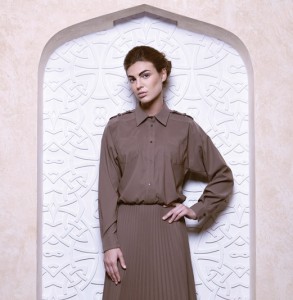 The Ukrainian Fashion Week started to celebrate its 30 years anniversary with the opening party at the restaurant “Byblos” and the designer’s Nadya Dzyak podium show. The “Elle”’s chief editor Sonia Zabuga and chief editor of “Harper’s Bazaar Ukraine” magazine Natalia Gouzenko, journalists and major insiders of the fashion world were present among the other visitors. Nadya Dzyak demonstrated her autumn-winter collection 2012 during the opening.

The designer confessed, that she has for a long time dreamt to create black and white collection, and she was inspired to do it by the artwork “The Artist” and by the aesthetics of black and white silent films. Nadya’s collection is focused on the combination of lightness, expressed with the help of silk and rough, heavy fabrics, such as wool, weavings and perforated skin.